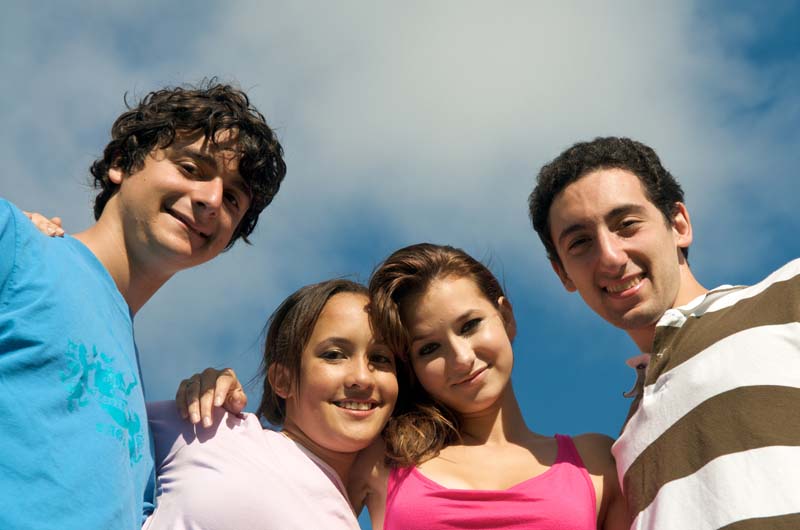 Jookender Community Initiatives targets those families with Teens that aren’t affiliated with any congregation, and therefore, don’t have access to all those valuable programs available elsewhere. Moreover, most of the 1st generation Jewish immigrant families will never admit that Anti-Semitism happens in America, at school, colleges, and even, in everyday life, as well. Because if they do, what is their excuse of not immigrating directly to Israel, if not for the safety of their kids? What is their excuse for immigrating from the country of their origin, as well? So, no matter how strong is the evidence of Anti-Semitism, they would try to refuse the fact that their own children might experience it on themselves. Parents are survivors, their children are not. Parents would know how to avoid such situations, Teens – will be helpless and confused about their own beliefs. And, because parents would refuse the existence of Anti-Semitism themselves, they wouldn’t care about such education for their kids, unless… it’s a part of a prestigious another program that parents actually want their Teens to be a part of.

Here, at Jookender, we have identified several programs that would prompt not only Teens but the entire family to participate and evolve.

• Volunteering at Jookender Family Overnight Shabbatons (We now run 3 per year, we may add more in the future, since this type of activity has become very popular in the community). Within this program, Teens are not the only volunteer – provide classes for younger kids, accompany them to the activities, or performing general tasks, but also participate in the activities of their own. Some of the activities are optional, but some are a must to attend. As a part of their program, we create activities that focused on Jewish history and traditions, the current situation with Jews around the World and roots of Anti-Semitism. 20 to 30 Teens age 15-19 Volunteer each time at our Shabbatons.

• Jookender Family Camps are not only a great way to attract and educate Volunteers, but also families with young children and Middle School Teens, as well. For them, we create a schedule of activities, and although everything is pretty much optional, historically, Parents try not to miss any of the activities, and there is an opportunity to talk to 100 adults in one room, as well. Middle School Teens are the hardest auditory to target, especially during the Shabbatons, but we clearly see that they are learning from older Teens and from their parents a lot more than one would expect.

• Jewish Teen Leadership and Social Entrepreneurship Program/Internship. This program is starting as a Pilot Program in February 2019 and will run for a small group of High School (HS) and College Students (5 in total), but in September 2019 it will be running in a few other states, as well, on a remote basis. The program will consist of ten (2-hour) classes that students will attend either in person, if live nearby, or through Zoom Conferencing, and weekly work assignments. All students will be divided by small, 3-5 students in one, cohorts, to create a Kaveret (Bee-house). They will be divided by geographical area, and in one cohort students from both, HS and College may participate at once. Local Students will learn and apply their just learned skills on different projects for Jookender. Remote Students will be assigned to work at one of our partners – we will be creating collaborative partnerships with other Jewish organizations that are close to the students. During the program, Students will be taught the basic of coming up with an idea and researching for the needs, creating and operating a small business, creating a nonprofit, understanding the basic rules of marketing, becoming a teacher/Jewish Educator, plan and organize events, etc. This is a complex, yet, seamless and hands-on program where students ‘learn by doing’, and ‘do by learning’. We had experience running such program in prior, but not on such a scale. We will be inviting professional speakers to talk to our Teens and provide workshops to them on a monthly basis. Confronting Anti-Semitism will be a required element and will be added as a part of the curriculum.

• Club Z partnership. We’d like to stay close with Jewish organizations that focus on Anti-Semitism Awareness and work with Teenagers on a constant basis. We would like to bring a group of 10+ Teen HS Students from Massachusetts to attend the Annual Club Z conference in January, on the West Coast. We are also interested in our partnership and collaboration, should Club Z starts their own Confronting Antisemitism initiatives in Boston and New England.

• Independent w/Jookender Jewish Heritage Family tours provide the excellent basis to start family (with Pre- and Teens) conversations regarding the need of teaching Teens to understand, evaluate, and fight Anti-Semitism with a great sense of intelligence. We’ve been already conducted 2 such tours in the United States, and now are planning our first overseas tour to Eastern Europe to learn about Jewish Settlements before and during the World War II and to visit Holocaust Memorials, included, but not limited to Auschwitz.

Each of the programs above would only win from an enriched Antisemitism piece added to it, with the help of your grant. Based on previous experience, each Teen that comes to our programs stays until he is overgrown his Teenage, brings at least 25 other Teens to us, during his years of services/learning, and continue serving Greater Jewish Community, outside of Jookender walls, with unique expertise, inspiration, and dignity.

The sooner we start this program, and include Anti-Semitism piece in our Teen programming, it’ll become beneficial for the entire community. Then in a few years, we would grow a new generation that understands and support the cause.

• Family Awareness workshops provide students in grades 7 - 12 and their families with the opportunity to discuss the nature and impact of anti-Semitism in their schools and communities, and identify safe and practical response strategies.

• As a part of Jewish Teen Leadership Program, workshops for college and pre-college students empower and equip them with constructive, effective responses to anti-Semitism and anti-Israel bias in the neighborhood or on campus.

• Confronting Anti-Semitic Incidents workshops provide adult members of the Jewish communities with resources and strategies to recognize and respond to anti-Semitism at home, in the workplace and in the community.

According to the Anti-Defamation League (ADL), the newly released FBI data showed hate crimes in the U.S. jumped 17% in 2017, with a 37% spike in crimes targeting Jews and Jewish Institutions.

While American Jewish Society admits the growth of Anti-Semitism around the country and is preparing to deal with it, the Immigrant Jewish Society would refuse that fact until it’s too late. The reasoning is simple. They had a choice to go to Israel, but they choose to immigrate to the United States because “it’s safer for their kids”. Their children are the most vulnerable group and we need to create an effective way to equip these kids/Teens with all necessary tools to confront Anti-Semitic incidents and control their own role in the situation. With the Teen power, it’ll be easier to convince their parents to admit, accept, and start preparing themselves and their children to confront Anti-Semitism in various situations.

Our main focus of this program are the 1st generation immigrant families that came from Eastern Europe and Former Soviet Union Countries and whose children (now, Teens) have been born at the United States. Our secondary focus is on the bilingual (Hebrew, Russian) families immigrated from Israel and the American Jewish Families, not affiliated with any traditional form of Jewish Entity (e.g., congregation or program).

• Programs that already include Anti-Semitism piece in them are always filled out in advance (Just as Family Trip (Teens + Parents) to Eastern Europe to learn more about the roots of Anti-Semitism and Holocaust Survivor.

We believe the following outcomes create a successful measurement for our programming:

• Affirmed value and importance of a positive Jewish identity.